Tortillas, or Adventures in Cabin Fever

January 11, 2011
As I write this, Atlanta is frozen in an armor suit of ice. The city has been closed for two days and tomorrow promises to be just as bad.  I haven't been out since Sunday. What is one to do?  Obviously, cook something that I otherwise would never get to, namely tortillas.
I love fresh tortillas---warm, supple, smelling of lard. The Old Town Mexican Cafe in San Diego is my tortilla mecca. Their front window is filled with a group of women who spend all evening rolling, patting, and cooking tortillas on a huge flat stove. Although I wouldn't make tortillas at home regularly, making them once is both a treat and an homage. It took a day of isolation to hatch the idea of making tortillas. I spent last night plotting my strategy. I had bought a bag of masa (corn flour) while shopping for the ingredients for my black mole sauce over the summer. I prefer corn tortillas; in my ignorance I consider them the One True Tortilla. I chose Alton Brown's recipe. The tortilla is one of those deceptively subtle dishes. It has only a few ingredients---flour, salt, lard, water---but the art is in the subtlety of their combination. I had to add a lot more water than the recipe suggested. In retrospect, my problem was almost certainly in substituting corn flour into a wheat flour recipe﻿. After two additions of water, the dough finally formed a ball but was still crumbly.  I added some more water by hand.  As it turns out, even that wasn't enough.  After mixing the dough, I wrapped it in plastic wrap and let it rest. 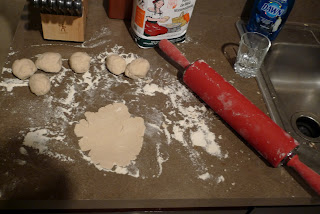 I formed the dough into little balls, which gave me one last chance to knead it. As I rolled them out, I could tell that they were still a little too crumbly.  Sure enough, they broke up a little as I transferred them to the pan. Despite this flaw, they cooked up nicely. The tortilla puffs up just slightly as it cooks even though it has no leavening.
And despite my C-level execution, they tasted great off the griddle.  They were too crumbly to bend or wrap, but that didn't matter once they were in my mouth. After an initial sacrificial tortilla eaten straight, I ate them with some chicken cooked in my black mole sauce from the summer, which I had the foresight to can. A little chicken, ﻿black mole, and tortilla all in one bite. A wonderful way to bring a little warmth into a cold day.