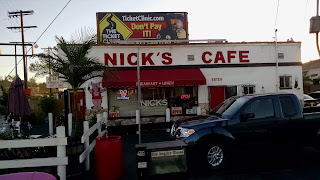 An article in from Los Angeles magazine led me to an outstanding breakfast at Nick's Cafe. It is in an unironically industrial neighborhood of Los Angeles, in the shadow of Dodger Stadium but very much in a different world. Nick's has a small parking lot but I ended up parking on the street. I had to hunt to find a spot not occupied by a semi. Inside, the room is all counter, no tables. The decor clearly shows that the restaurant has been here since the '40s and that the owners clearly feel a sense of pride and community.

I arrived a little after 7 AM and the place was in full swing. A few women came through but this is very much a guy's place. Some were in ties, others in t-shirts. All were girding themselves for a day on the job through both food and friendship. Most of the people there were engaged in conversations that started before I arrived and continued after I was gone. 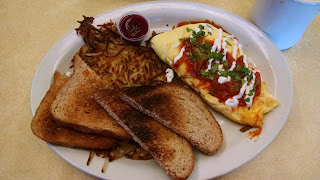 Every part of my breakfast was outstanding. My omelette was cooked perfectly---very fluffy. The salsa had just a bit of kick; its juiciness was also a nice complement. The potatoes were excellent. The small cup held homemade apple sauce. It was on the sweet side, which worked perfectly as a contrast to the salsa. The result was an effect similar to potato pancakes. My whole wheat toast was very good and rounded out the meal. The coffee kept coming, as it should be in a place like this. I left refreshed and invigorated, ready to take on my own day. 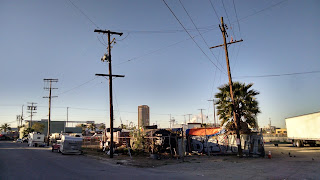