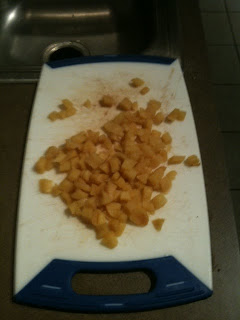 Here is the result. I peeled two large ginger roots, cut them into small cubes, and put them in the pressure cooker with heavily sugared water. The traditional method first boils the ginger in plain water to soften it and then again in sugar water to candy it. The resulting candy was very tender but still with the characteristic ginger texture. It was also sweet without being overpowering. The traditional method leaves a lot of sugar crystallized around the ginger. The pressure cooker gives a much more subtle result. The ginger stays moist even after it cools but you can dry it in the oven at 350 degrees for about 10 minutes. That inspired me to dip it in chocolate. 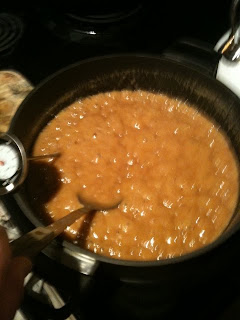 While I was in the business of dipping candies, I also decided to make a batch of caramel. I ended up making two: the first one was just a little too hard and the second one was very soft. The temperature I cooked the second batch was only 3-4 degrees below the first batch but the result was very different. The candies were soft enough that gravity would flatten them out just a little. But that is a perfect consistency for chocolate dipping. 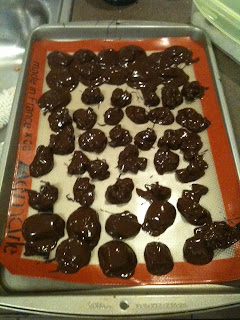 Here is the final result, thanks to my newfound chocolate skills. I dipped the ginger in small clusters which makes a very nice visual presentation. Dark chocolate is the perfect complement to the subtleness of the pressure cooker ginger. And the caramels are just luscious.