The Meers store is known for growing its own hormone-free beef. I had seen it on TV several times, but when I saw them just a few days before a trip to Oklahoma City, I took it as a sign from God and made it my top priority. The family could wait. My cousin, it turned out, had been there, so we regaled my uncle with stories of hamburgers that fill pie pans.

I had to drive an hour and a half from Oklahoma City to get to the restaurant; that’s only slightly less time than I spent on the airplane flying from Atlanta to OKC. Meers is north of Fort Sill, roughly in the middle of nowhere. It’s close to 30 minutes off the Interstate; in the 21st century, anything not within 100 yards of an exit ramp is considered to be dragon territory.

Meers is even smaller than it appears on television, really just one building. But that building is quite capacious and they are set up to accommodate not just a couple of hundred diners but also a long line of aspiring diners. I arrived around 5 PM but managed to pull in just after a school bus full of Boy Scouts. I was worried that I would be waiting for a long time, staring longly at hamburgers going past me to a room full of boys with hollow legs. But in fact they disappeared into the restaurant and I was seated very quickly. 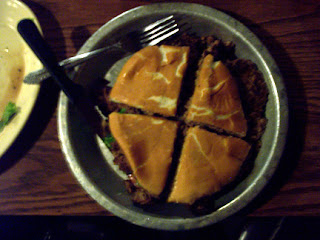 For those of you who haven’t seen the food on TV, the hamburgers are served in pie pans---this is one large hamburger. I went to the salad bar just to be sure that I had enough roughage in my system to keep all that meet moving. I also tried the fried green tomatoes and had a little cobbler for good measure.

The meat is excellent. It has a rich and subtle flavor that one does not associate with hamburgers. The meat has to be well done given the danger of salmonella, but it is juicy and tender. The condiments are similarly fresh and flavorful but the meat is the star of the show. I’ve had Kobe beef in Kobe and I prefer the Meers hamburger meat.

My only complaint about my Meers hamburger is the hamburger format. The meat is so flavorful that I considered the bun, good as it was, to be an intrusion. I would have been quite happy with a naked ground beef patty filling that pie pan. It’s somewhat startling to realize that all the components of the hamburger, which form some of my earliest memories, are there to hide the mediocrity of the meat that is at the center of the burger. The Meers Store Web site says that part of their secret is the melding of the flavors of the toppings and bun with the meat. But why not put lettuce and tomato on top of a naked patty? Or maybe a minibus?