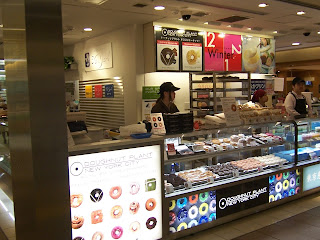 http://www.doughnutplant.jp/
Location: All over Tokyo and environs
Last visit: January 20, 2009
The Doughnut Plant (note that the spelling is not “Donut Plant,” which would clearly be too lowbrow for such a culinary endeavor) is a gourmet donut establishment on the Lower East Side of New York City that has received a lot of press attention over the past several years. But despite several attempts, I had been unable to locate it in Manhattan. Little did I know that all I had to do was to get on an airplane and sit for 14 hours. Tokyo is riddled with Doughnut Plant locations. While on a train ride through Tokyo, I switched trains at Shinjuku station, the world’s busiest train station, and found a Doughnut Plant booth right in front of me. All thoughts of dieting immediately vanished from my head and I rushed over, consumed by thoughts of round fried dough.

Keep in mind that not all Japanese licensees of U. S. food concepts are worth walking across the street. Our visit to the Kyoto outpost of Café du Monde was a huge disappointment. Luckily, not all fried dough outlets are created equal and the Doughnut Plant’s wares were excellent. The decision was difficult, but I decided to try the triple chocolate doughnut, a cake donut with a chocolate drizzle on top. The doughnut was tender and moist. The chocolate was very high grade. The concoction was certainly sweet but not overpoweringly so; I am less and less interested in sugary treats as I get older and wiser. Of course, for three bucks, it should have been good…

Those who haven’t been to Japan may be surprised to know that it is, in fact, a paradise for donut lovers. The Mister Donut chain, originally from Boston, has a large number of outlets throughout Japan; I even went to one on the island of Hokkaido, home of the snow monkeys. Mister Donut treats the experience much more seriously than do U. S. donut spots. For those who dine in, they serve their donuts and coffee on china. Their seating areas are not luxurious but very restful, decorated in wood tones rather than the sixties color palate that Dunkin Donuts uses in the United States. Nor is Mister Donut the only purveyor of good donuts in Japan; I remember a particularly good donut from a Japanese shop underneath the Kyoto train station. The next time you’re in Kyoto, skip Café du Monde and go for one of the many real donut shops.