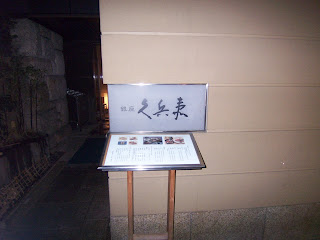 Just before my visit to Japan, the Wall Street Journal ran an article on the record prices paid for tuna by sushi restaurants in Tokyo. I took this as a sign and decided to visit one of them. Since Kyubey was the only restaurant mentioned that has an English Web site, it became my objective. The thought of an expensive meal in Tokyo didn’t phase me. I’ve paid good money from some very bad meals in Tokyo; while there is a lot of good food in Japan, it is also easy to find bad food and pay for the privilege. And sushi is one cuisine in which price is more reasonably correlated with quality. Barbeque, for example, is the art of making good food out of mediocre cuts of meat, but money often buys noticeable quality in raw fish.

Kyubey is located on the Ginza, which is a very expensive district but also one of the older sections of Tokyo. Our chef told us that the restaurant had been there since 1935; many of the stores on the Ginza were established in the 19th century.I went with my former student Yuan Xie. I tried to call for a reservation but I couldn’t make sense of the reservation, so we decided to arrive right at the 5 PM opening and take our chances.

As it turned out, we didn’t have any problems getting a seat, though we were asked to finish by 7 PM. Like most sushi restaurants, it is small. One would have a hard time playing billiards in the room even after removing the sushi bar. Because we were the only patrons in the restaurant for quite some time, we received even more attention from our sushi chef than usual. The sushi chef normally spends time chatting with his patrons, who sit in front of him while he prepares their food. Our chef’s English was more than adequate for the purpose and he was very gracious.
Well thought out meals are orchestrated. Ours started with two small appetizers, followed by raw fish, then grilled fish, soup, and sushi roll. We had tuna in three forms. First was the raw fish course, where we were able to enjoy it without worrying about any other elements. Next was fatty tuna sasimi. The tuna had zebra stripes of fat through it; the chef handled it with great care. Third was a roll with finely chopped tuna, once again very subtly flavorful. We had several types of shellfish, each served with salt. The shellfish did not have the taste of the sea that one sometimes finds in Western seafood restaurants so the salt was a vibrant accent. One of our interludes was a baked eel spine. It was crunchy and nutty. I am not a big fan of eel, a story that I might tell in another entry, of this journal nor am I in the habit of crunching bones, but it was wonderful. Later in the course, we were served eel meat sushi: one piece with salt and the other with a teriyaki-style sauce. Both were very delicate and without the taste of oil that is so common with eel.

The chef prepared each piece very carefully. Many of the pieces received lime juice. For each one, he squeezed a couple of drops on each piece from a fresh half lime, then disposed of it, even though there was plenty of juice left for the next piece. The sasimi and sushi were very carefully garnished: a few drops of lime juice, a touch of wasabi, and a basting with just enough soy sauce using a brush. I tried to respect his preparation by eating each piece as he gave it to me, without dipping or dabbing. Our final course was two large strawberries, each cut in half. Each strawberry was perfectly shaped and unblemished.

The only other customers who joined us at the sushi bar were an elderly gentleman, followed by his young lady friend. The man was clearly a regular with whom the sushi chefs were very comfortable. When we stepped out the door, we saw his Rolls-Royce waiting out front, accompanied by his patient driver.