Is Atlanta an Italian-free zone?

March 06, 2009
This is the first in a series of blogs on one of the dark secrets of the Atlanta food scene---the entire Atlanta metro area has been declared an Italian-free zone.  I'm not sure how it's done---dragnets at the state border, perhaps---but passable Italian food is as scarce in this town as ice cubes on the sidewalk in August.  The truly horrific situation is in the pizza domain.  Atlantans seem to think that pizza is bread with cheese and meat piled on, sort of like a red sandwich.  But other varieties of Italian food are equally hard to find.

I should explain that I'm primarily talking about Italian-American food, which is a distinct species from the food one eats in Italy.  Italian-American food is heavier and heartier, rich in both meat and carbs.  Red sauce is known as gravy.  Pizza comes in several styles, but in America it's a meal, while in Italy it is a snack. 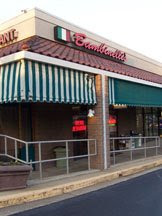 There are a few bright spots and I'll devote the remainder of this entry to one of them.  Bambinelli's is near Northlake Mall.  It is run by a family that moved here from Connecticut.  The restaurant has most of the requisite badges of Italian-Americanism: photos of family abound; very friendly wait staff.  All they are missing is the Sinatra soundtrack.

The defining quality of Italian-American restaurants is the red sauce.  Bambinelli's is slightly sweet for my taste but it has a good balance of flavors.  I usually get something with red sauce. But tonight I wanted something a little different, so I had the shrimp scampi, which hit the spot. The rolls that come out at the start of the meal are excellent. They are based on pizza dough but buttered and I think with a hint of cheese. We also had calamari, which was my taste of red sauce for the evening. No dessert tonight, but they have the usual complement of desserts, including cannoli.  A good cannoli is hard to find in this town, so grab one when you can. 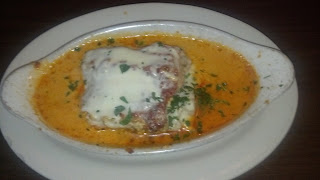 Here is a 2013 update. This is my vegetarian lasagna. The cheese makes the dish satisfyingly rich but the lack of meat means it isn't too heavy, which lasagna can sometimes be. The pasta in the lasagna was just right. The sauce tasted great.