June 19, 2009
After a false start, we finally held the Donut Hamiltonian today. This is a Hamiltonian path (if you have to ask, it isn't worth explaining) through the independent donut shops of Atlanta, with a nod to the chains. The rules were simple. Each participant ate two donuts at each stop: a control donut, a glazed donut; and a free choice donut. Throwing up was not allowed. 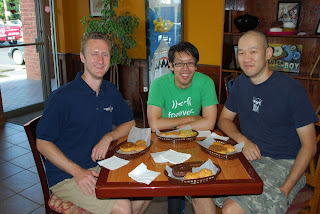 First stop was Sublime Donuts on Tenth Street. It did not disappoint. My free choice donut was a chocolate raised donut, which had chocolate dough and a chocolate icing. Both that one and the glazed donut lived up to the high standards that I expect of Sublime. We all enjoyed the handmade coffee as well. 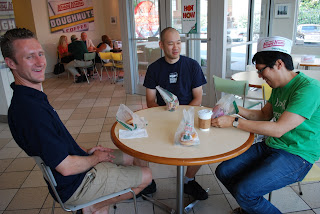 Next stop was the Krispy Kreme mother ship (Gabe's term) on Ponce. My glazed donut was warm and that was enough to make it very tasty. 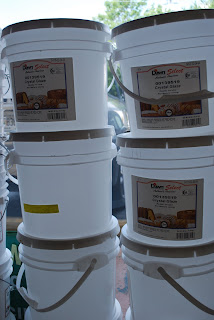 Third stop was Happy Donuts (every city has to have one), which is near Grant Park. The less said about this stop the better. I' showing you the empty containers of glaze they were selling ($2 each) to spare you the sight of the donuts. Our glazed donuts were stale. I decided to eat it as quickly as possible to get it over with. After this stop, the sugar started to hit me. 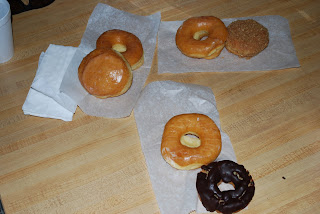 The fourth stop was Dandy Donuts in Chamblee. (Nate was out of the game at this point, not due to lack of bravery but due to another appointment.) This place was a solid contender, as I expected. My free choice donut was a chocolate iced donut, which was pretty good.

We had originally planned six stops but we decided to stop at four. The sugar was getting to all of us at that point. (I did eat my donuts the fastest, even though I was the oldest person there by a large margin.) Eating eight donuts in an hour an a half wasn't as bad as my Bell Labs experience of eating a 10-scoop sundae, but it did take a day or two off my life expectancy. Nonetheless, the quest has its own rewards.