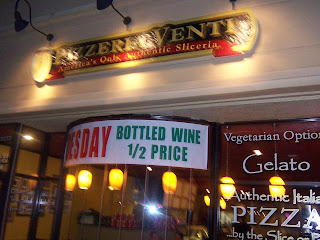 Pizzeria Venti is on Lenox Road. It's on my back path to Lenox Mall, so I've had my eye on it for awhile. Tonight was the right night to try it. One could think of it as a Southern-style cafeteria of Italian food, but a lot of places in Italy are a similar style. You order from the counter and they bring your food to you. 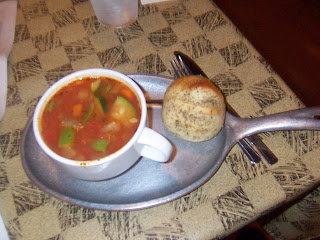 I started with a bowl of vegetable soup. It came with a roll that was very soft, which was its downfall; too soft, no crust for contrast. But the soup was very good. The broth was flavorful but light and the vegetables were soft but not mushy beyond recognition. 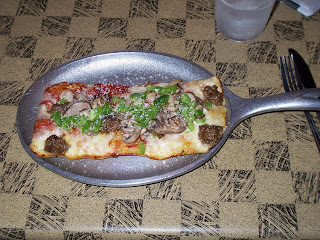 I think of their pizza style as a variation of Sicilian. That's a species of pizza that is hard (but not impossible) to find in Atlanta. Their version is thinner, but it is rectangular and has a crunchy bottom at the bottom of the bready crust. I enjoyed my slice. I would have to say that classic New York style pizza is my favorite, but this is a nice change of pace.