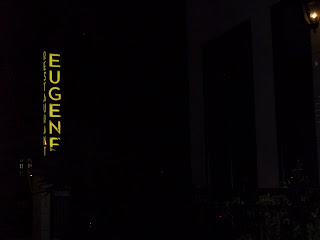 Restaurant Eugene, on Peachtree in south Buckhead, is one of the best restaurants in the country. Chef Linton Hopkins has been nominated for a James Beard Award and his Southern-inspired cuisine has received wide attention. A visit from my old friend Mark Horowitz seemed like the perfect occasion to try it---Mark must get tired of all that California cuisine in Palo Alto.

The menu has an interesting organization. Each section---fish, vegetables, meat, has several tasting-size items and a few main course-sized items. It's very easy to mix and match.

I started with a salad, then had shrimp with rice cheese grits. The rice grits is pretty much what it sounds like---rice prepared as grits (presumably including the lye treatment). They are very mild, making them an excellent complement to the shrimp. 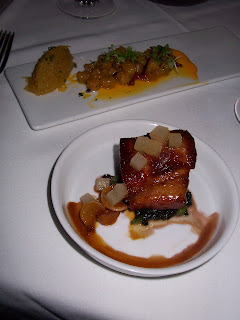 This is the black pork belly, with the black coming from sorghum. It wasn't quite as black in appearance as I had been led to believe by the name, but that's OK. The texture of the pork belly was wonderful. The exterior was browned just enough, the inside was extremely tender, and the mouthfuls of fat were as tender as anything I've had (and I've had Kobe beef in Kobe). 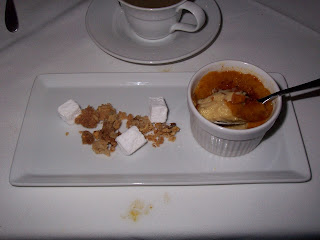 For dessert, I had a sweet potato creme brulee. It was very well executed with just the right amount of sweetness.

The restaurant was jam-packed by the time we left. That's a pretty impressive feat in this recession and speaks to the quality of the food. The service was also excellent; my only qualm was that it took quite some time to bring the dessert.