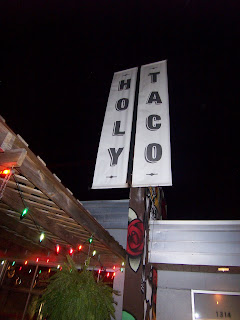 Leslie came through again with Holy Taco. It's near the corner of Glenwood Avenue and Flat Shoals Avenue. I have no idea what this neighborhood is called but it seems very hip in an unspoiled way. The atmosphere is casual but nice. You order from a waiter rather than standing in line as at Taqueria Del Sol. The menu is small plates, which is a natural for tacos, but they have several items that don't fit the standard Mexican food categories. 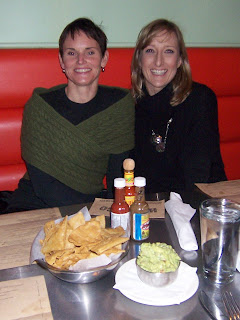 Christine and David joined us, which allowed us to try a wider variety. Leslie and Christine model the guacamole, which is always a good way to start off a Mexican meal. The chips were very handmade and were made of two layers. They were very fresh but beware, they are greasy. 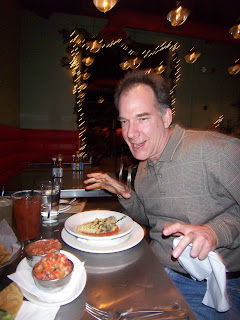 David models his chile relleno. I didn't sample it but he said it was quite good. David and Christine also ordered this non-typical Mexican item,
which is a has cheese, Mexical-style sausage, anchovy, capers, and cilantro on a bread base. 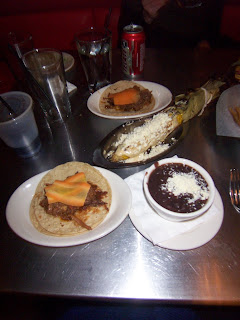 Here are a pair of beef brisket tacos and a side of black beans. I also had the free range chicken taco. The free-range chicken has a pretty subtle taste, and although it was very good I got a little more kick oujt of the stronger taste of the brisket. The beans still had some tooth to them, which is the way they're supposed to be, so far as I am concerned. 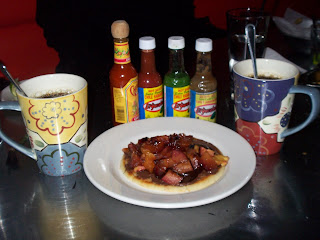 This dessert is another item that has Mexican inspirations but isn't really Mexican food. It has plums and other fresh fruits on top of a pancake. It goes great with coffee. Don't worry, we didn't actually put the hot sauce on the dessert.