July 14, 2010
I just noticed Daily Bread. It's on Marietta Street next to Bottoms Up. They have a variety of sandwiches, but what caught my eye was the bread bowl. I tried one with french onion soup (they were out of tomato, unfortunately). I also had a Caesar. I thought the soup was good and french onion is a relatively difficult soup to do well. The bread was OK but nothing to write home about. It was a little smaller than I expected. If I had to compare to Panera, it would be at best a tie. The salad was fine, though it could use a little more dressing. The service was a little disorganized but very friendly---they are obviously trying hard. The restaurant probably opened very recently and I expect that things will become more regularized. They also have an impressive coffee bar for the caffeinated crowd. 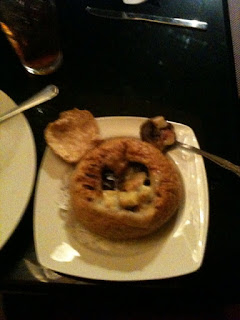