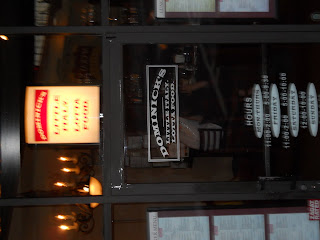 Dominick's is in old downtown Lawrenceville, which has been very nicely restored. The restaurant is in a restored building with a decor that is modern but fits well with the original intent of the building. 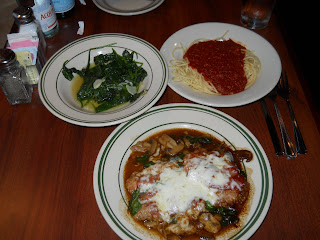 The menu is fairly classic Italian-American. Dominick's is clearly trying to project the style of a family restaurant you might find in New York. By the standards of New York, Dominick's is OK. By Atlanta standards, it is very good. I had the veal saltimbocca; I scraped the plate clean. The tomato sauce on the pasta had a strong note of oregano, which was nice. I also had some spinach cooked with garlic. (All this was a half order, by the way, which was plenty for me.) I noticed that they had regular broccoli, not broccoli rabe, as you would find in an Italian restaurant in the Northeast. They also didn't give me any choice in pasta---it's spaghetti for everyone. For dessert, I had a cannoli, which was just stuffed as it should be and very good. The service was attentive but not overbearing, even on a busy night. Overall verdict---satisfying.