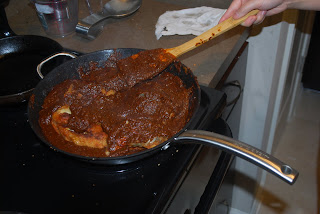 Jennifer, Yu and I made chicken mole last night. It was a complex and fascinating process. Gringo that I am, I didn't know that mole means "ground up things," not just a chocolate savory sauce. Guacamole, for example, is a mole. I looked at three different recipes, all with variations, and we settled on one from the Food Network. We used an entire page of ingredients, many in very small quantities: two pecan halves, three peppercorns. The recipe called for five types of chiles. I wandered aimlessly around Buford Farmers' Market until I stumbled across the Mexican spices aisle, which had most of the chiles I needed. I guessed some substitution for the rest. The entire process took four hours of constant work. We didn't use a completely authentic process---for example, the traditional folk ways use a Waring blender to smooth out the sauce while we used an Oster. The result was an extremely complex taste. You could taste it for a minute or two and feel the flavors change. Some heat came at the end but there were so many other flavors as well. The recipe called for several of the seeds to be fried. We probably pushed the edge frying. The sauce had a very nutty taste and I think it would have been a little more subtle if the seeds had been cooked a little less thoroughly. As an experiment, we tried frying the chicken on the theory that the crunchy outside would provide a good texture complement, but that didn't work so well. Overall, it was one of those cooking experiences that I'll remember for a long time. I won't do this every week but I'm glad I tried it.