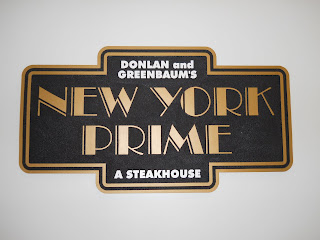 I first went to New York Prime during one of my pre-move visits to Atlanta. I've been on a steak kick lately for some reason so I decided to make a return visit. As it turns out, it's part of the restaurant group that owns Joey D's. 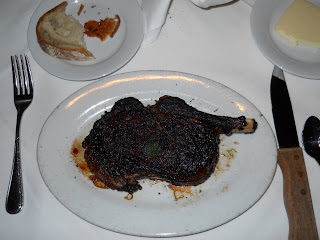 I startred out with the chopped salad, which was cole slaw in consistency. That was my mistake, I was hoping for something with a little more chewability. My steak was very good. They cook their steaks with what they call a Pittsburgh char (although I think it's just the old steakhouse way to do it---Peter Luger does the same thing). The steak wasn't quite as charred as I had expected, given the warning. The meat was clearly carefully selected. I also enjoyed the southwestern creamed corn, a nice change of pace from standard steakhouse corn.

So, you ask, how does the New York Prime steak compare to the Joey D's steak? I think I was too hungry to make a careful comparison, but NY Prime does emphasize the char a little more. I usually think that if I'm in a carnivorous mood I might as well go for the char. Joey D's menu is broader.