December 12, 2010
Holeman & Finch is the gastropub creation of superchef Linton Hopkins, who also created Restaurant Eugene next door.  (And who, by the way is Eugene?)  It's on Peachtree (where else?) in the lower Buckhead restaurant corridor.  This place has been on my agenda for awhile; last night the place was thick with 30-somethings having a good time. 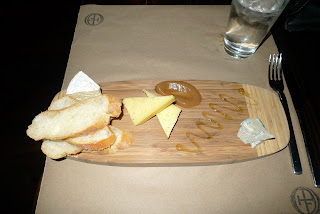 The menu consists mostly of small plates, which suited me fine because I wanted just a little pickup.  My first choice was a cheese plate which was served with a dollop of apple sauce/butter and a squiggle of honey.  Two out of three cheeses really caught my fancy, which is a pretty good ratio for blind choices.  I particularly liked the blue cheese with a little bit of honey and apple. 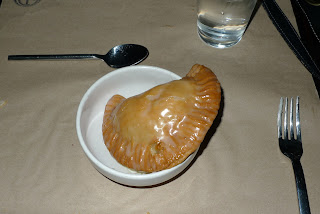 I finished up with the apple pie. No, it isn't a warmed-over Hostess pie. You also can't see the ice cream underneath.  It was exquisite.  First, the pie has a very clear note of fried---not greasy but something more like lard, an ingredient near and dear to all Southerners. The ice cream was also very rich with a clear, refreshing taste of vanilla.
At some point I'll make it back here for their signature dish, the special burger.  It is served in limited quantities as a late night experience, so I will have to plan my evening around it.  But the burger is supposed to be worth it.