January 30, 2011
I finally collected on my bet on the 2008 election.  My reward was a steak at the best restaurant in Atlanta. Dimitrios finally came in from Europe and took me to Bone's.  The wait was definitely worth it.

I started with a Bibb-style salad with some tart apple slices, bleu cheese, etc.  It was very subtly done, with all the tastes in place but none overwhelming the other.  I could even taste the lettuce, which can get lost.  I usually order a wedge salad with a big bleu cheese dressing when I get a steak.  I'm glad I went for something more subdued. 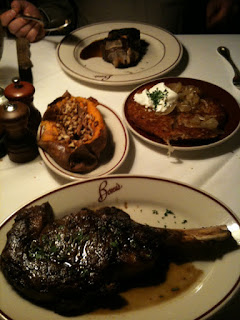 The steak closest to the camera is mine, a dry aged ribeye.  Dimitrios's bone-in filet is in the back. In between we have his hash browns and my sweet potato.

When I saw a dry aged steak on the menu I had to try it.  (They have a non-dry aged ribeye as well.)  I've had dry aged meat a few times before and the process definitely adds to the flavor of the meat. My steak wasn't overpoweringly meaty, which can happen if one isn't careful with aging.  It was also very tender and juicy with wonderful flavor.  The bone-in filet is a cut that I haven't heard of before.  It was a fairly small but thick cut of meat with a big bone.  Dimitrios said that he really enjoyed it.

I think that Dimitrios won the battle of the side dishes.  The hash browns were formed into a perfect patty with fried onions and sour cream on top.  The combination of tastes and textures was a perfect accompaniment to a steak.  My sweet potato had a lot of butter, brown sugar, and pecans on it. While a good idea, both of us found it a little overpowering.

This sort of meal calls for dessert.  I had the dark chocolate mousse and Dimitrios had the creme brulee. Both our desserts were subtly done and not overpoweringly sweet.  We ended up taking some of the dessert home but it was a wonderful way to cap off the meal.