February 08, 2011
My friend and colleague Steve Nowick visited, giving us the chance to try Empire State South, a relatively new restaurant at Peachtree and 10th.  It's the Atlanta outpost of a well-known Athens chef.  The restaurant itself is very spacious with large dining and bar areas. They also have some dessert items out and wrapped, as if in a small-town store.  I'm quite frankly not sure whether those are for show, carry-out, or snacking in the bar. 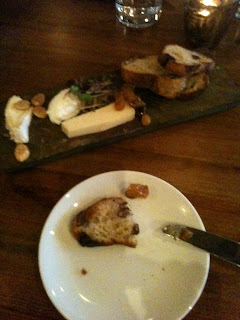 Steve and I agreed that we enjoyed the first two courses the most.  This is the cheese course, which had three Georgia cheeses, all of which were delicious.  The cheeses came off as fairly light, probably a combination of their intrinsic characteristics and the fact that the portions were small.
For a second course, Steve had a bean soup that he loved.  I had a field green salad which had several very thin, delicate slices of ham as a garnish.  The ham didn't overwhelm anything else because the slices were so thin---they complemented the very fresh lettuce extremely well. 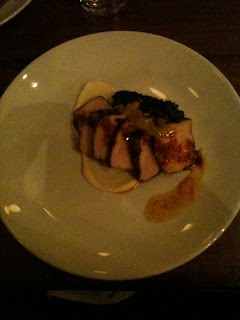 I had the pork for the main course.  It too had a very subtle flavor: tender and pink on the inside with a very delicate crust.  It was very well executed but somehow didn't excite me as much as the other courses.  Perhaps I was expecting something a little more porky.  Steve had the chicken, which he also said was very good but not as much fun as the other courses.