March 23, 2011
I decided that ﻿this is my week to try baking a cheesecake.  It's one of those things that I never ate as a kid and learned to love in the Tri-State Area.  (Junior's in Brooklyn serves a truly amazing cheesecake.)  But there's always a first time for everything, including baking cheesecake.
The name "cheesecake" pretty well describes what's in it: a whole bunch of cheese, some egg to bind it together, and a surprisingly small amount of sugar.  All too many cheesecakes use gelatin as a filler.  If you see even a hint of gelatin in your cheesecake, flee from it as quickly as you can.  The difference in taste and texture between a real cheesecake and a faux cheesecake is unmistakable.
I started with Giada De Laurentis's cheesecake recipe on the Food Network site, but ended up making some changes.  Her recipe called for 4 1/2" springform pans, but I could only find an 8 1/2" springform.  Sizing up a baking recipe is always tricky. Doing it for a type of dish that you've never made before is very problematic (i.e., dumb).  But I tried it anyway.  Her recipe also called for basil in the cheesecake and I chickened out on that one. 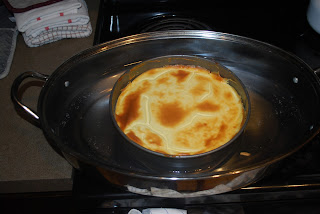 Here's how I ended up doing it.  I combined four 8 oz boxes of cream cheese, 16 oz of ricotta cheese, two 5 oz containers of goat's milk cheese, three or four tablespoons of sugar, two eggs, and four additional egg whites.  I combined all of them in the food processor; I suspect the Kitchenaid mixer would have also worked well, but a smaller mixer might not have had enough power.  The mixture started out very stiff and I was very skeptical about how well it would combine.  But the eggs managed to soften the  mixture quite a bit and the result was soft and easy to spread.  I put the mixture into a buttered 8 1/2" springform pan (I should have put parchment in the bottom---my cake-making technique deserted me briefly) and used a knife to even out the top.  I put the springform pan into a larger pan with water half way up the springform and put into a 350 degree oven.  After 50 minutes it didn't look anywhere close to being done, so I gave it another 20 minutes.  The result of the 70 minutes total is in the photo; the larger pan is the water bath.  Perhaps a slighly shorter cooking time would have been ideal, but I don't think the cake suffered too much.  I turned off the oven and let the cake and water bath cool with the oven for an hour.  I then wrapped it in plastic wrap, pan and all, and put it in the refrigerator overnight.  The next morning, I took the springform edge off and wrapped the entire cake in plastic.
I learned the hard way that you don't try a cheesecake warm, unlike an apple pie.  I put a small amount of batter in a small bowl and tested it while it was still warm.  The result was a little strong and harsh.  I was afraid that I would only be able to use the cake as a doorstop.  But I tried the rest the next morning and it was pretty good.  So I have high hopes for the cake's debut on Saturday.