Summary: Good in a competent way.

Pacci is in the stylish and relatively new Hotel Palomar.  (One of my colleagues stayed at the hotel and really enjoyed it, by the way.) The room itself is, quite frankly, a little overdesigned for my taste.  I think it looks like an interior decorator's attempt to emulate the sort of very stylized rooms that people in 1950's movies seemed to live in.  The entrance is wacky---the receptionist' podium is at a vestibule that no one uses, not near the bar where everyone enters from the hotel.  But these are minor qualms. 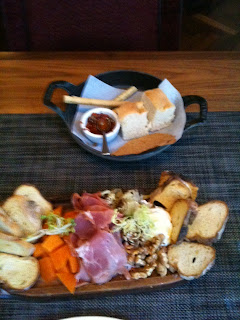 I started with a cheese and meat plate, which turned out to be both very sumptuous and the hit of the meal.  Pacci allows you to choose the combination you want and provides both meats and cheeses. I tried a ham, a hard cheese, and a softer cheese. 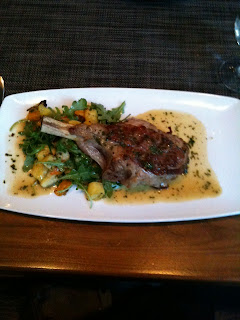 For my main course, I had the veal chop saltimbocca.  This is a big chop; it arrived with a very meaty aroma, which immediately invigorated my tastebuds. The meat itself was well prepared, but the dish's conception was heavy on the chop and light on the saltimbocca.  That dish is normally served not only in smaller pieces, but in a sauce created by deglazing the pan.  With a chop this size, the sauce got lost. It came with potatoes and greens, which I must admit was an interesting variation on the traditional saltimbocca presentation with escarole.