April 17, 2011
I found a recipe for a brioche-dough coffee cake ring in Julia Child's book The Way to Cook and it has been in my dreams since then, waiting for the opportunity to be realized.  This week was that chance.  A brioche dough is rich to the tune of four eggs and 1-1/2 sticks of butter so it made perfect sense for a rich pastry.

I made one batch of dough and let it rise the prescribed 45 minutes.  I didn't see any change whatsoever.  So I did what any reasonable baker would do, namely fret about the weather and wonder if I had killed the yeast.  But I was also determined not to let this lump of dough get the best of me, so I made another batch of dough.  Four more eggs, 1-1/2 sticks of butter, and 45 minutes later, I had another batch of dough with no visible rise.  Desperate, I put a piece of the original batch of dough into the oven.  It puffed up fairly nicely, so I knew the yeast wasn't dead.  I decided to use the first batch to make a practice set of pastries and use the second batch for the final pieces.

Since the coffee cake recipe only required a half recipe of dough, I decided to use the rest for a chocolate babka.  If you don't know what a babka is, it is a wonderful chocolate roll that was the subject of a Seinfeld episode (http://en.wikipedia.org/wiki/The_Dinner_Party_(Seinfeld)).

After kneading the dough, I gave it a first rise of about an hour in a greased pan. I then punched it down and let it rise again overnight in the refrigerator.  In the morning, I rolled out and formed the dough. The ring coffee cake requires a long, narrow piece of dough.  The filling consisted of walnuts, raisins, brown sugar, and cinnamon.  My practice coffee cake included a little molasses in the filling, which gave it a wonderful flavor, but unfortunately I forgot to add it in the release version. 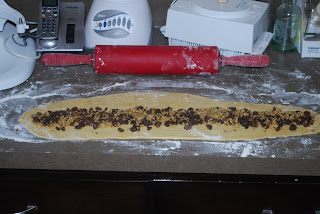 I then rolled up the dough very carefully and pinched it together as carefully as I could. I formed it into a ring and cut openings around the edge. I proofed it by putting it in a cool oven with a pan of steaming water for 15 minutes. 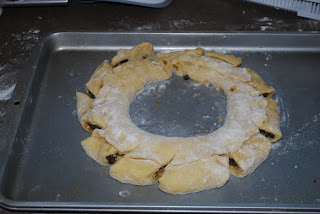 I then let it rise for a few hours before adding a streusel topping (sugar, flour, oil) and baking. The baking itself took only about 15 minutes.
The babka was simpler.  I rolled out the dough and spread a chocolate mixture on top.  The filling consisted of a Lindt bar finely chopped, some sugar, and a little cinnamon. I then rolled it up and put it into a bread pan for the final rise.  I worried that I hadn't put enough chocolate into the filling but the final result had plenty of chocolate. 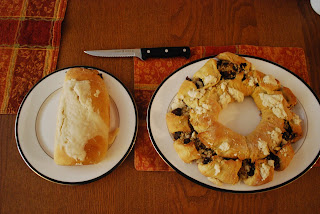 The results tasted great.  In the end, it rose quite a bit. I just had to give it more time. I suspect that the dough takes longer to rise because it is so rich and heavy. I need to work on my hand skills to improve the visuals of the coffee cake, but the brioche was both rich and soft. That's a big ring, by the way---big enough to cover the entire serving platter. This recipe requires some time and effort but it is a great special treat that I plan to add to my reservoir.  I've made sweet rolls for 20 years as my baked treat and it's about time that I diversified...