April 22, 2011
Category: Good local place
Summary: Typical north Indian fare, but at least they're not afraid to use spices 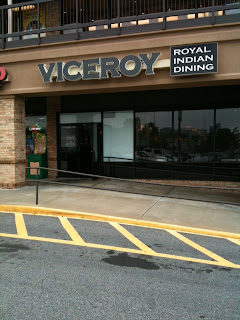 I noticed the sign for Viceroy a good six months ago and finally made it there for lunch.  It's in the Wal-Mart shopping center on Ashford-Dunwoody Road.  The interior and service are both fairly upscale.
I stuck to the vegetarian side of the lunch buffet.  It was all pretty standard fare.  Not that there's anything wrong with that---a good, competent meal is always welcome.  And, in fact, I thought that Viceroy was more willing to use spices than quite a few of the local Indian restaurant.  All of the dishes had a little zing, whether from cumin, coriander, pepper, or other appropriate spices.  I ate up the onion chutney with a spoon and then went back for seconds.
By the way, is there a category for Indian-American food?  I've talked about the differences between Italian-American and Italian food, and Chinese food in this country is well known to be Chinese-American (yes, I'm talking about you, egg foo young).  I don't know enough about Indian food to be able to say, but I would guess that much of the food at Indian restaurants in this country has been adapted for both American ingredients and palates.  My bean dish, for example, was made with red kidney beans.  And I can't tell you how many times I've been to an Indian restaurant in the South, craving spicy food, and coming away with a meal that was as flavorful as baby food.