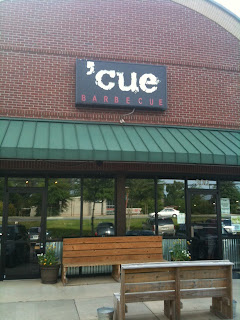 I'm not sure why I started thinking about 'cue but I've wanted to try it for several weeks now.  I finally made it to the Alpharetta site.  It's part of the upscale BBQ movement: rustic decorations but waitress service, live music, and a more upscale menu. 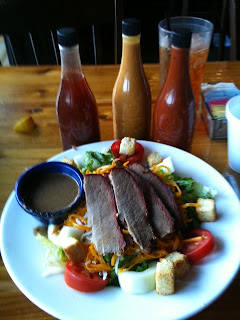 As an example of their menu's appeal to the broad spectrum, they actually have salads.  The salad is a rarity in traditional BBQ; most denizens of such places insist that their greens be thoroughly cooked in pork fat.  I decided to try their garden salad with some brisket on top.  I started with the brisket.  It was tasty and tender, but although it had a prominent smoke ring (you can see it in the photo) I didn't get any smoke flavor.  Of course, the bark, that outer layer of the meat, had been removed, making the meat look more like a deli presentation.  As you can see, the table comes with versions of three of the basic BBQ sauces: vinegar, tomato, and mustard.  My favorite was the mustard, but all of them were relatively mild.
The salad itself had no shortage of protein, with plenty of cheese and chopped egg.  My vinaigrette dressing was great---tangy but not overwhelming.  I also got to try some sides.  The pickled vegetables were excellent; they had acidy brightness without the mouth-puckering.  The Brunswick stew was very savory.
Overall, I thought the food here was good but safe.  Pretty much anyone can be comfortable here; even a vegetarian can find something to eat.   The food was all well-prepared and tasty.  But I wouldn't call it exciting.  The lack of smoke taste in the meat is an example of that---good meat but with nothing that anyone might find off-putting, like that pesky smoke taste...