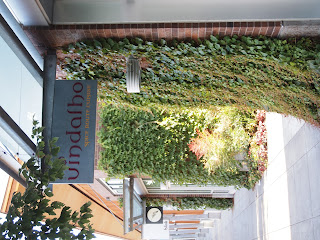 My friends Payel and Arijit introduced me to a wonderful Indian fusion restaurant, Vindaloo.  It's in East  Portland, a part of town that is nice but not at all pretentious, full of well-loved homes and small neighborhood places.  It did take me a few minutes of wandering around to find the restaurant itself.  (Note to hip restaurants: a small sign doesn't make you hip, just hard to find.)  The decor is very modern and full of light.  The food is truly outstanding but nothing comes across as trying too hard. 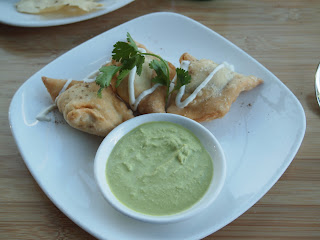 I started with samosas made with yukon gold potatoes.  Quite frankly, I don't think the yukon golds didn't make a real difference but the samosas were great.  The crust was much more tender than the average samosa.  The samosa is the Indian version of that Southern favorite, the fried pie. 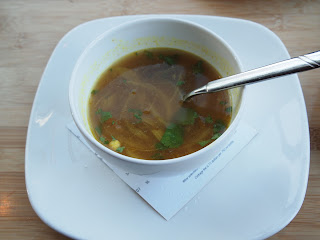 This is vegetable soup with tamarind, absolutely my favorite dish of the meal and one of the best things I've had in awhile.  The soup itself is very light.  I'm used to having tamarind in heavier foods and the contrast between the tamarind and the light broth was an eyeopener.   I have some chicken vegetable soup and I'm going to see if I can reproduce this effect. 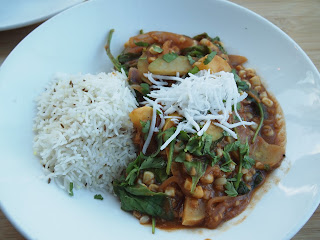 My main dish was dal koutoo, which was a medley of fresh vegetables.  The sauce was quite savory but not in a heavy-handed way, just a great complement to the vegetables. 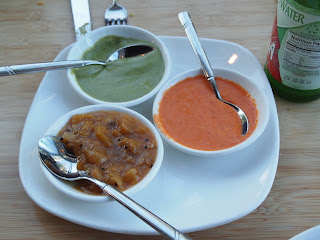 We also had the chutney assortment  My favorite was the pear chutney.  The red was a red pepper and the green was mint.
We finished off the meal with some masala tea.  The spice blend was very rich and complex, quite frankly better masala tea than I've had anywhere in Atlanta.