September 01, 2011
I got into the habit of canning tomato sauce when I lived in New Jersey.  There's a reason that Campbell's Soup is headquartered in New Jersey---they have a heck of a lot of tomatoes.  I would make at least one, and sometimes two bushels of Roma tomatoes into sauce, can it, and then have it to eat all winter long. 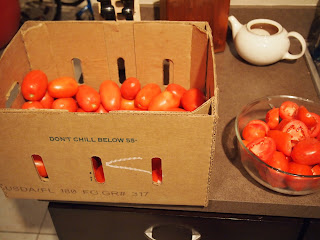 I bought my box of tomatoes at the Buford Highway Farmer's Market for about $20.  I keep my canned sauce simple, adding just some onions, a tiny bit of salt, and a little basil.  When I use the sauce, I have plenty of opportunity to add things to the sauce as the situation demands. 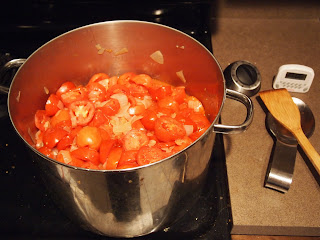 This year, I tried two new techniques that worked out pretty well.  After cutting up the tomatoes and cutting off the stem area, I heated them in the microwave before I put them into the pot.  As the tomatoes cooked, they let off water, which I drained off.  The water had a little bit of tomato taste but not too much---I tasted it to be sure. Both these techniques reduced my cooking time by several hours. 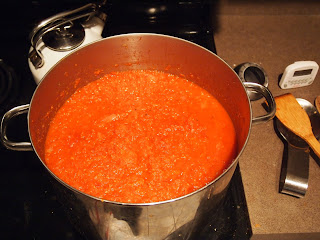 As it was, it simmered at very low temperature for about 4-1/2 hours.  Here is the sauce near completion.  The tomatoes break down quite a bit during cooking but not quite enough.  I use a stick blender to smooth out the sauce.  It works pretty well, is much easier than using a strainer, and it's fun. 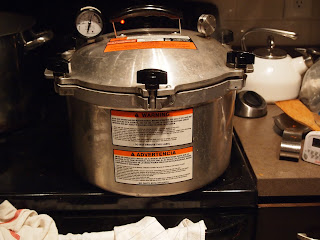 And here is the pressure cooker.  Tomatoes are relatively safe to can thanks to their acid content but I always cook them longer just in case.  That one case of tomatoes gave me 12 quarts of sauce that will make my winter meals nicer.  And my house has smelled like tomatoes all day long.