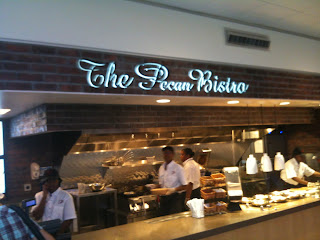 The Pecan Bistro is one of the restaurants in the food court of the new international terminal at ATL. (It's on the upper level, in case you're looking.) Since you can get to the international terminal on the train, I decided to pop over to sample the new restaurants and Pecan Bistro, given its Southern theme, sounded like a good place to start. The food court also features the Varsity---why did it take them so long to establish a beachhead at ATL? 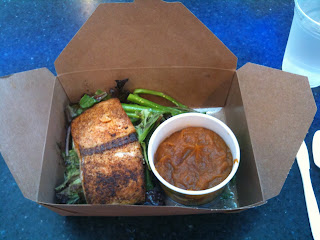 Pecan Bistro provides both paninis and entrees. The dishes lean toward Southern seafood. This is my salmon, served with sweet potatoes and asparagus on a bed of lettuce. The salmon and asparagus were prepared as I watched. (The pans of food at the front are just for show.) The salmon was delicious. The asparagus was cooked to just the right balance of tenderness and toothless. The sweet potatoes are a little sweet for me, but I would probably be outvoted on that by the majority of Southerners.