June 26, 2012
The Silver Skillet was one of the first entries I posted on this blog and, being new to the area, had only been there a few times. I decided that the Skillet deserves a more reflective review. 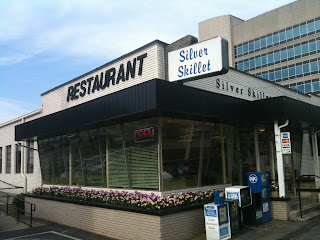 The Skillet is a good 60 years old at this point. It's a Georgia Tech institution. I see colleagues there regularly (sometimes that's good, sometimes not so good). But clearly it has a wide following---the 14th Street bridge construction put a dent in their business, so a lot of people must cross the great I-85 chasm that separates geeks and suits in order to have their breakfast. The Skillet wears its age well. It doesn't play up its quaintness or its fame. It's just one of those places that never changes. 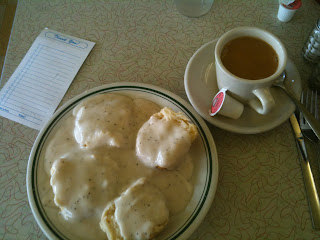 The piece de resistance of the Skillet is the biscuits and gravy. The gravy is silky smooth. Luscious is the best term I can think of to describe it. The biscuits hit the perfect balance between flakiness and moistness. I think that lunch at the Skillet isn't quite up to the same level as breakfast. But a hidden gem on their menu is the lemon icebox pie. It is a perfect specimen of a species that one doesn't see every day. Try it some time---remember that pie is the All American breakfast...