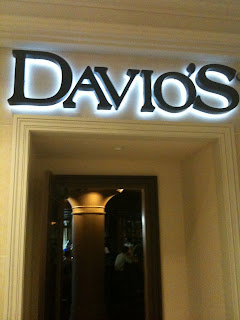 Davio's has been a fixture in Boston's Back Bay dining scene for several decades. I ate there quite a few times back in the 20th century. Their Atlanta outpost is in Phipps Mall. The atmosphere is quietly luxurious. As you can tell from my photos, the lighting is low. One interesting feature is a separate bar just for solo dining.

I've eaten at Davio's twice now. On my first visit, I concentrated on the steak, which was beautiful meat given excellent preparation. This time, I had a yen for pasta. I started with the safe choice of a Caesar salad. Their version has a very definite anchovy zing. Anchovy is in theory in all Caesar salads but usually more in spirit than in fact. The bite of the anchovy was a welcome introduction to the meal. 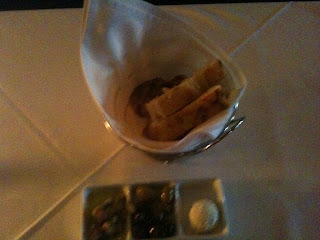 I had forgotten how much I enjoyed their bread and additions. I devoured the olives. They had an excellent, firm texture and were deliciously salty. That's white beans and mild red pepper on the left side. 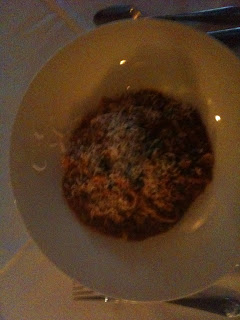 My main course was a classic (and labeled so on the menu): tagliatelle Bolognese. The pasta was al dente. The Bolognese sauce was luxurious with both tomato and meat. It managed to be both subtly delicious and comforting. 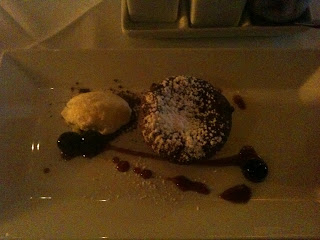 For dessert I had a chocolate lava cake served with cherries and a dollop of ice cream. The ice cream seemed to have a few ice crystals in it but the cake was wonderful and the cherries were a great addition one doesn't see all that often.