September 02, 2012
I've loved tamales ever since my mom gave us canned Hormel tamales when we were kids. I realize that isn't the highest expression of the tamal, but to a 5-year old the combination of corn and meat was pretty great. I've since had real tamales which I love even more. I've been thinking about making my own for awhile.

My rendition was loosely based on recipes in Diana Kennedy's book on Mexican cooking. The biggest difference was in the masa. The basic combination is masa, lard, a little salt, and water. It took a lot more water to hydrate my dried masa than I thought. The result was a little lumpy but in the end turned out OK. Peanut butter consistency seems to be a pretty good target. 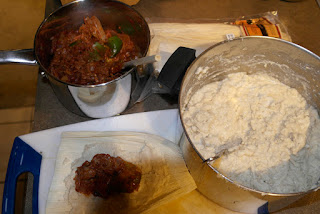 I made the filling from leftover pork roast that I had smoked awhile back. I added tomatillos, tomato paste, pecans, apricots, onion, garlic, salt, and cinnamon. I also made a few using just Arthur Bryant's BBQ sauce for the pork.

Next came stuffing. I spread the masa onto a corn leaf, then added in a little filling, trying to avoid the temptation to overstuff. I rolled up the corn leaf, which wasn't quite as messy as I had feared. 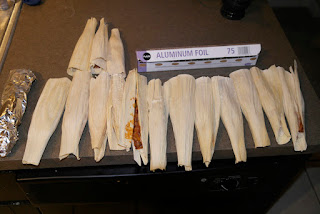 I then wrapped each tamal in aluminum foil. What, pray tell, is the traditional way of wrapping them? 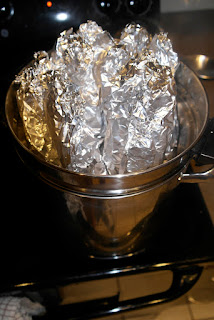 I then put them in the steamer vertically. My steamer wasn't quite as roomy as I had hoped. The tamales stuck out the top a little, so I closed it with more foil. I steamed them for an hour. 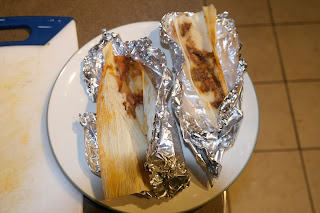 The results were great. The Arthur Bryant's filling was good but the homemade filling won hands down thanks to all the widely different types of ingredients. The masa was creamy in texture and corny, a perfect complement to the pork. I resisted the temptation to eat them all right away and put most of them in the freezer.