December 25, 2012
Mom and I decided to treat ourselves for Christmas by making an apple dutch baby. It's usually classified as a pancake but think giant popover. When I was little, Mom would order the dutch baby at Village Inn. They don't make it any more so we decided to take matters into our own hands; we used Rose Levy Berenbaum's recipe.

The batter is very simple but rich---two eggs plus two egg whites. You pour it into a hot, buttered skillet and bake it for an hour. The egg whites cause the batter to puff during baking.

Meanwhile we made the apple filling. One recipe requires six apples, which is about what you would put into a pie. Butter, sugar, and spices form the syrup for the apples. Once the popover is done, just pour on the apples. 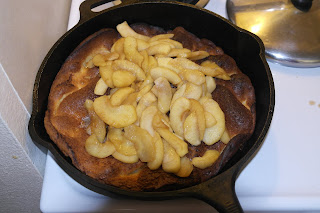 Hers is the finished product. It didn't last long. The eggs in the batter make for a rich, eggy contrast to the apples. The popover also gives you a nice texture contrast. By the way, that's a large skillet. This is one big pancake. If you make it yourself, be sure you have helpers around to eat it.