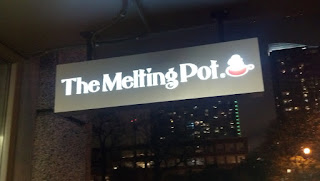 Hyesoon and I were in the mood to talk. We decided to try The Melting Pot in midtown. It's very near campus and I've been by it dozens of times but never tried it. Fondue is a great meal for talking. Things go slowly when you cook only one or two pieces of food at a time and talk is the natural thing to do.

Their menu is much more complex than a typical fondue restaurant. They emphasize a 3/4 course meal: cheese fondue, salad, meat fondue, and possibly chocolate fondue for dessert. They have a dizzying variety of options for all the fondues. 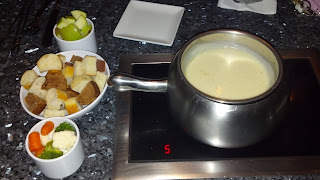 This is our cheese fondue course. As you can see, they give you a variety of dipping items, including the traditional bread and fruit as well as some other items. The cheese fondue contains both kirchwasser and wine. We both really enjoyed the flavor of the fondue. It must have been the variety of wine they chose that gave it a very lively flavor.

Their meat fondue course can be made with the traditional oil for cooking, but they also have broth-based cooking baths. Good Marilyn was in attendance that night so I went with the broth. I had a surf and turf meat fondue: chicken, beef, and shrimp. The broth was surprisingly tasty, particularly on the shrimp; the seasonings they put into the broth are most noticeable on the shrimp. It cooks everything surprisingly fast, too.

Our chocolate fondue course had darn and white chocolate chocolate swirled in a yin-yang pattern. Sorry I didn't get a photo, but I was pretty full at that point. The presentation was very skilled and it tasted great. Once again, they gave us a wide variety of dipping items, both traditional and not-so traditional.