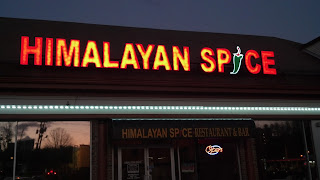 Himalayan Spice recently opened at what I like to think of as Ethiopian Corner, Clairmont and Briarcliff. The cuisine, however, is Nepalese and Indian. I'm not sure that I've had Himalayan food before, so this was a welcome find. The restaurant itself is very large and nicely appointed; the bar appeared to be quite large. The service was very friendly. 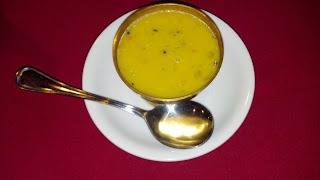 I ordered the chicken thali (that's Indian for blue plate special). This is the multi-bean soup, which was similar in my mind to a dal but somewhat thinner and with lighter beans. I have been in a soup mood lately and this was a good way to start off. 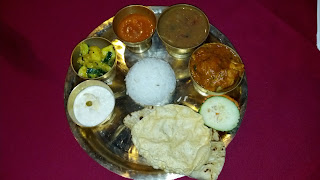 The thali itself was similar in general form to an Indian thali but with some variations. Those are a naan and a papadum on the plate. The naan was a little thicker and and not puffy compared to the Indian version. The mixed vegetables and the tomato concoction were both served cold, which I enjoyed. The cool temperature was particuarly welcome in the tomato dish, since I had ordered spicy. The chicken dish itself was somewhat less spicy and served in a sauce that was thickened but not really rich. I finished off the meal with the rice pudding, which had just the right sweetness. Overall, I think this place makes a good addition to the neighborhood.