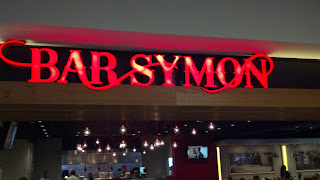 I was disappointed by my visit to Bar Symon. Airport restaurants have an opportunity to be a haven in the midst of commotion. Iron Chef Symon's restaurant failed in that mission. 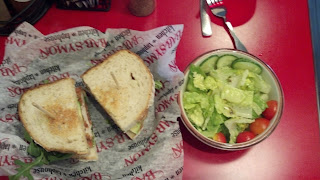 My salad was billed as the Simple Salad but I think that the restaurant veered a little too far in the simple direction. As you can see, it is mostly iceberg lettuce; the other vegetables are placed unartfully around the edge. Worst was the dressing, which veered much too strongly in favor of olive oil at the expense of vinegar, leaving an oily film.

My crispy chicken sandwich was quite good. It came on lightly toasted sourdough with great flavor. The crispy chicken's crust was nice and crunchy. The avocado gave the sandwich some moisture without messing up the chicken.

But the restaurant's biggest failure was service, which should be the hallmark of any airport food operation, whether it be fast food or fine dining. I was seated at the most remote table in the restaurant. The waiter came by, I gave my order, and he then disappeared for a long time. After a long drive to the airport and a stint in the security line, I was in the mood for water, which was not forthcoming after I drained my first glass. Finally my food arrived and I was able to ask for water, but my waiter disappeared again. I finally found him and asked for the check after I had finished my sandwich. He disappeared again for several more minutes. An airport restaurant shouldn't add to a patron's stress level. Unfortunately, Bar Symon failed that test.