August 06, 2013
Jaemor Farms had raspberries in stock the other day. I couldn't resist buying a carton. Surprisingly, it took a few minutes for me to hit upon the obvious use for them---ice cream. I always loved raspberry sherbet at Howard Johnson's when I was a kid. I think that the rapsberries make a perfect complement to the richness of the cream. And because raspberries are pretty firm, they don't have as much water to mess up the texture of the ice cream with ice crystals.

I started out with Alton Brown's Serious Vanilla Ice Cream recipe. I made only a half-recipe. I also substituted all heavy cream for his mixture of cream and half-and-half. Of course, I left out the dollop of peach preserves; I also didn't use any vanilla.

I threw the cream and raspberries into the food processor and blended everything together. I then scalded the mixture and let it cool overnight in the refrigerator, per Alton's recipe. 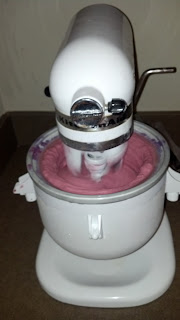 The next step was to churn the ice cream in my Kitchenaid ice cream bowl. You can see the mixer hard at work here. The mixture grows quite a bit in volume with the churning. The rule of thumb is that a stalled mixer means the ice cream has churned enough. This took awhile, but I finally reached the stopping point. 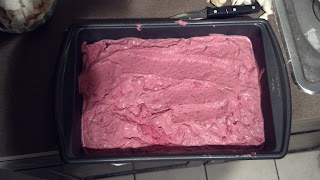 I then used a tip I picked up from a Cook's Illustrated article on ice cream. I put the ice cream, which was the consistency of soft-serve, into a shallow, pre-cooled pan and put it into the freezer. The shallow pan helps to ice cream to harden faster, giving it a better texture. 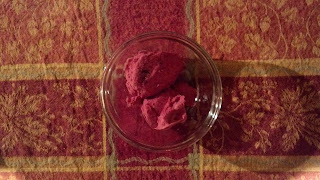 Here it the result. It was luscious. The texture was a little firm, but that is easy to solve by letting it thaw for just a minute. Few things say summer like fresh, homemade ice cream.