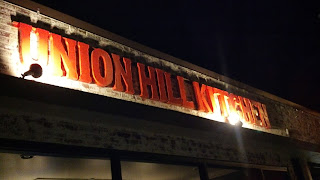 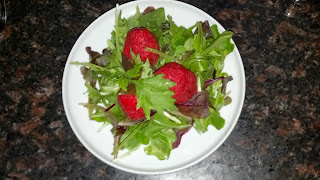 Deconstruction seems to be a theme here, at least for the meals I ordered. I started with the summer salad. Those aren't tomatoes on top of the greens. They are instead tomato sorbet presented as tomato-y snowballs. They were spectacularly good. The cold, oddly enough, enhances the saltiness and acidity of the tomatoes. The texture of the sorbet adds crunch to the salad without resorting to croutons. 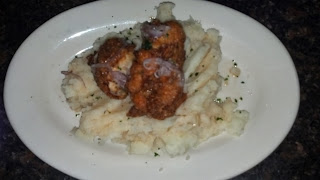 My main dish was the fried chicken, served atop a mountain of wonderful mashed potatoes. The fried chicken had a generous crisp crust and meat that was cooked just the right amount to retain its juiciness. The chicken had been deconstructed---its bones had been removed, then it was reassembled to resemble the original breast.

Chef Alexis stopped by to chat. He explained that they opened for lunch in October, then expanded to dinner in December. Lunch has a more casual atmosphere. He also explained the secret of his fried chicken: a drizzle of locally-sourced honey and sriracha sauce. The combination is very subtle but effective. It doesn't ruin the crunchiness of the crust and neither the sweet nor heat are overpowering. But the combination takes this fried chicken out of the ordinary.