March 30, 2014
Yes, you read that title correctly. Yesterday, I bought some fresh lard at the Buford Highway farmer's market, something that I have wanted to do for awhile. I have used supermarket lard for several years. I recently found out that commercial lard is processed much like shortening. They process with the same goal---longer shelf life---and with much the same results. I wanted to compare and see what difference fresh lard would make. 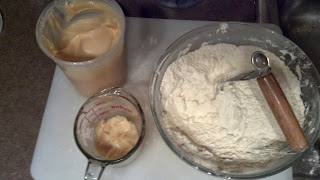 So far, I have made both peach pie and biscuits. This is my mise en place for the biscuits. You can see that the lard is light brown in color, very different from the translucent white of the industrial-grade variety. Even after sitting in the refrigerator overnight, it is still soft and pliable, also unlike factory-made lard. That makes it very easy to work into the dough. 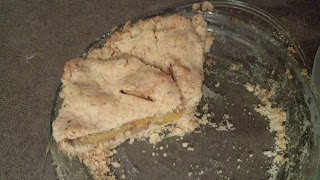 Here is some of that peach pie... 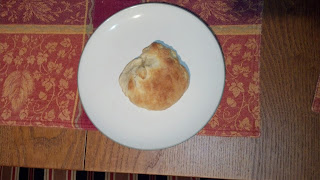 And here is a biscuit. In both cases, the taste was subtle but definitely there. At first, both the pie and the biscuit tasted similar to what I would expect from factory lard. After a few minutes, particularly for the biscuit, a bit of pork flavor came through in my mouth. I suspect that the peaches in the pie masked whatever pork note may have been in the crust. I'm sure that some people wouldn't like it, but I think it is pretty tasty. And, as I understand it, fresh lard is healthier, although I understand that is a relative concept. But I will definitely put fresh lard on my rotation of fresh ingredients.