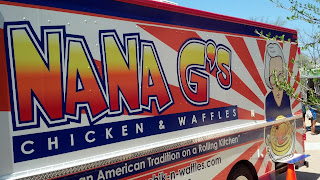 Today I had the chance to try Nana G's. Their truck features a super sized portrait of a rather stern-looking Nana G. I would be afraid for my personal safety if I complained about my dinner to her. But according to the Web site, the truck is run by Nana G.'s grandson, who appears to have come out not only unscathed but with a talent for cooking. The inside of the truck features a battery of flippable waffle irons---think Courtyard Inn on steroids. 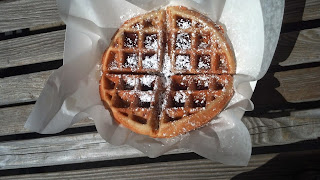 This is my bacon-infused waffle; I decided to hold off on the chicken for today. The waffle was right off the griddle, piping hot and crisp. The critical question is that "bacon-infused" part, of course. It really did have a bacon flavor. I'm not sure exactly what they infused (the milk?) but whatever their technique, it worked.

It appears that most of the GT food trucks run out of food early---a lot of the food trucks told people in line that they were out of certain items. A lot of students come out of class at 1:25 on Tuesdays and Thursdays ready to eat after hearing their professor drone on for not just 50 minutes but an entire hour and twenty minutes. Let's hope that they figure out their provisioning to be sure that those hungry students get fed.