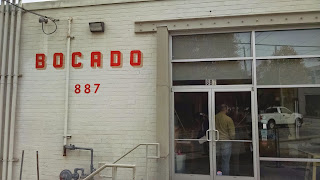 Bocado has been on my list for a long time and I finally had a chance to try it. The Westside gets hipper by the day; new apartment buildings are sprouting everywhere. 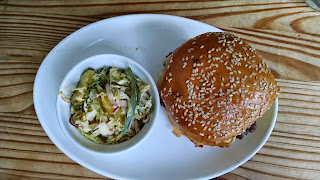 The burger seems to be the destination dish at Bocado. I ordered mine with cole slaw, which had a lot of unusual ingredients, such as pickles, that made a Southern standard just that much more interesting. The burger itself was excellent. The meat came in two patties that had been charred just enough to give the texture and taste that you want from a burger. The chesse is American; personally, I prefer something with more zing like blue or sharp cheddar, but this was a very high quality American cheese that gave the burger both taste and texture. The oozy texture of the cheese was a great complement to the char on the burger.