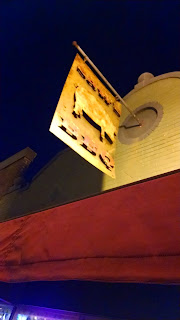 Saw BBQ is in the Homewood neighborhood, a pleasant little downtown area with relatively upscale stores. Some of the old-style BBQ joint atmosphere at Saw is cultivated, but it looks like their oven has been there for a long time, so I suspect this storefront has had more than one world in the meat-o-sphere. 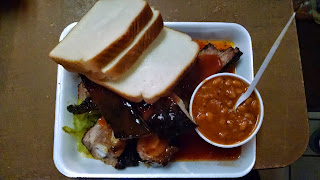 This is my half rack of ribs with a side of baked beans. I was hungry and was tempted to order a full rack, but this was more than plenty. All the ribs were meaty and several had huge, thick layers of meat. (I wouldn't want to meet that pig in a dark alley.) The sauce has a strong vinegar note; the sauce is red but not thick.

The beans deserve special mention---they were superb. They were clearly hand-cooked with great texture and taste. I could imagine making a meal out of a big bowl of these beans.