February 06, 2015
I heard one or two food shows talk about pork confit, a variation on duck confit that had never occurred to me. A confit is a meat cooked in a bath of its own fat. So I decided to take this idea out for a spin. My ingredients were simple: a complete pork shoulder from Publix, a steal for less than $20; and two tubs of fresh lard from the Buford Highway Farmer's Market. The pork shoulder came vacuum packed in a brine, but I decided to pack it in my own brine (pickling salt plus molasses) for the last day. The shoulder was so big that I didn't have a pan big enough to hold it, so I also picked up a foil roasting pan. 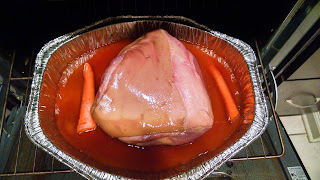 Here is my pork shoulder going into the oven. I also threw in two carrots from the refrigerator, which turned out to be a great idea. I didn't have enough lard to fully cover the shoulder. As it turned out, I had enough to produce a good effect. The fat cap on top of the shoulder probably contributed as well. 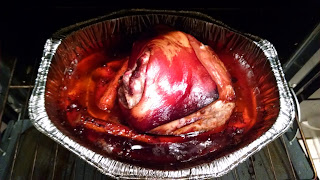 Here it is coming out of the oven. I think this was the best pork roast I have ever had: juicy, tender, porky but not overly strong. It was so good I went back for seconds and thirds. A surprise bonus was the skin that came on top of the shoulder. It wasn't quite a ciccarone since it hadn't been fully fried but it was delicious. It was crispy, slightly carmelized, and with a touch of pork flavor, like a thick pork potato chip. The carrots were delicious, too. They didn't taste fatty, just like a concentrated carrot.

And I now have enough pork left over for three or four more meals. My next step is to use some of the pork in a batch of chili.