May 22, 2015
This may sound un-American but I didn't grow up eating macaroni and cheese. We were a macaroni-and-tomato sauce family. In fact, I refused to eat cheese as a child. Mom still reminds me that I referred to cheese as "spoiled milk." Eventually, I learned to appreciate and love cheese. I've had a hankering for cheese for the past few days and I decided to cure it by making macaroni and cheese. 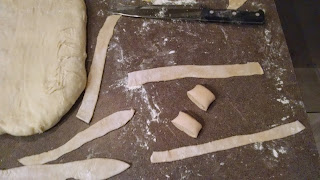 I made my own pasta. This was the first time that I have used the Italian grandmother method of rolling up the pasta sheet and cutting it. My first attempt resulted in the rolls sticking together at the edges. I rolled out the sheet again with a little more flour. That was enough to do the trick. 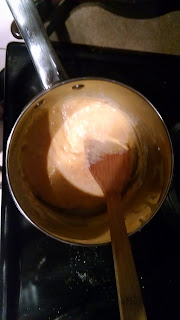 The sauce starts with a butter-and-flour roux. I used heavy cream as the base. After adding an egg, I added some grated cheddar cheese. 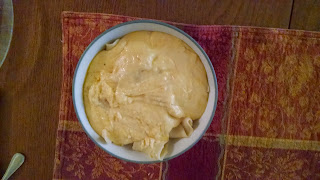 Here is the finished dish. Wow, was it good. It was rich and creamy but the taste of the cheddar really came through. The wide pasta noodles held up very well to the heavy sauce. Was I missing something when I was a kid...