Since this is apple season, I have been busy with apple pies. I decided to order a novel ingredient from King Arthur, namely boiled cider. It's a very concentrated form of apple cider. It has the consistency and color of a good balsamic vinaigrette but tastes, of course, like apples. I made a pie using King Arthur's recipe here. 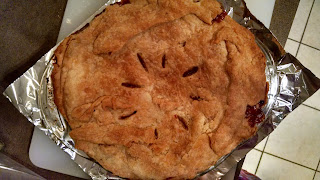 The result was delicious. The boiled cider gives the feeling of a liqueur, although non-alcoholic, of course. It brings out the apple flavor in a way that is distinct but not obnoxious. This was a luxurious breakfast, I thought. 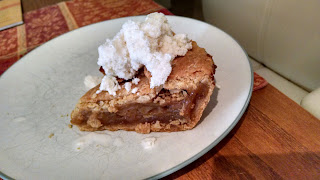 But then I noticed that the recipe recommended eating the pie with vanilla ice cream. Good idea, I thought, so I whipped up a batch in my Kitchenaid mixer. Wow! The richness of the cream goes wonderfully with the boiled cider. You haven't had apple pie with ice cream until you've had it with boiled cider.