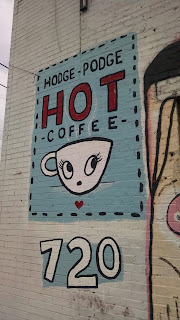 Moreland Avenue is a rapidly changing neighborhood. Hodgepodge is a very hip spot that serves not just coffee but a good selection of food as well. The space is large and full of light, as befits a gallery. Parking is also plentiful. The staff is friendly and helpful. 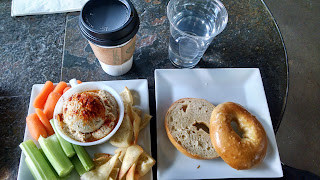 Hree is my hummus plate. The very generous portion of hummus was rich and much thicker than the grocery store variety. It had a nice dose of paprika but I do wish it had a bit more sesame. The veggies were very fresh and tasted great. The pita chips, unfortunately, were a bit of a disappointment. The menu promised Holeman & Finch pita, so I had hoped for a nice soft piece. Even in the best of circumstances, using such a nice piece of bread for chips does seem disappointing. But these chips were too soft to be chips and too hard to be bread. They weren't stiff enough to take up that nice, rich hummus. Luckily the veggies were up to the task.

I also ordered a salt and olive oil for later. I believe that this was from Holeman and Finch as well. It was great---it had exactly the right amount of chewiness you want in a bagel. The salt was a great addition that resulted in a soft pretzel-like experience.

The coffee was fairly dark roasted and quite good.