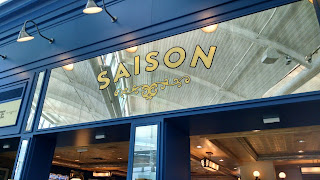 As part of my layover at Newark Liberty, I picked up lunch at Saison in Terminal C. This location, like many in Terminal C, is part of the Cibo empire. Some of the independent spots seem to have given way to Cibo.

This restaurant uses the tablet ordering system that seems to be coming popular. Let me cast my small vote against this system for a simple reason---it dehumanizes the staff. With ordering taking place on an impersonal screen, this system reduces the staff to delivery agents. If you eat at one of these places, be sure to let the staff know that you appreciate them.] 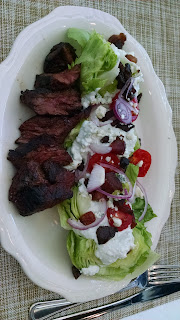 I will say that my wedge salad was very enjoyable. I added on beef, which was tender on the inside and nicely charred on the outside. The bacon bits on the salad were similarly satisfying. The bleu cheese dressing was rich without being overwhelming. For some reason, I find the occasional wedge salad to be an enjoyable indulgence. This salad satisfied my craving for something savory but not overwhelming.