In Defense of Cheap Bread Machines 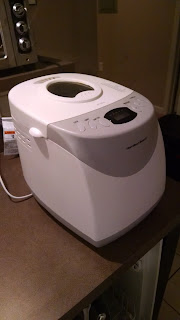 As part of my occasional series on gratefulness, I would like to take a moment to acknowledge the steadfast service of my Hamilton Beach bread machine. Here it is kneading a batch of brioche for a Mother's Day fig pastry. A few days ago, I used it to prepare a loaf of anadama bread that provided two breakfasts.

This machine has been integrated well enough into my life that I can't quite remember the details of its acquisition. I think that I bought it about four years ago for about $45. I have made bread occasionally for years using my trusty Kitchenaid mixer. At that point, breadmaking was a hobby, with most of my daily bread coming from the store. But eventually, I grew tired of paying high prices for bread that wasn't as tasty or as wholesome as what I could make myself. The only real problem with the Kitchenaid as a bread maker is managing the rising process. I had long been skeptical of the quality of bread produced by bread machines, based entirely on one or two samples early in the lifecycle of this product category, but I decided to give them a try. That's when I bought this machine. Not only did I not know enough about bread machines to know which machines I, as a modern consumer, should lust after, but I wanted to test out this process without spending too much money. The Hamilton Beach fit the bill.

Since then, I've baked a loaf a week using this machine. I use the machine only for kneading, then transfer the dough to a pan to bake in the oven. Once or twice, even the effort of that step has exceeded my available energy, so I've baked in the machine as well. The crust is both thick and uneven, not as nice as what I can do in the oven. But it was still nourishing and satisfying.

For several years, I lusted after a Zojirushi, having read many glowing descriptions of its abilities on the Web. A few months ago, I managed to overcome that greed and have come to appreciate the capabilities of my simple, cheap machine. I'm sure that the Zo makes a better crust, but that isn't a big priority for me. Many reviewers talk about the gentleness of its dough cycle, but I am not convinced that it is noticeably gentler than the cheap machines. The Zo does have two paddles, but that design choice was made by the desire to create a horizontal loaf that more closely resembles the traditional loaf. I haven't seen anyone compare to see whether two paddles make a noticeable difference in the quality of the bread.

My simple bread machine has helped me feed myself and my family. It has also given me a great deal of pleasure. I can't ask for more from a humble machine.