July 15, 2016
I had a free afternoon and took the train to Osaka to explore its famous street food. The Dotonbori district, near Namba station, is a famous tourist area for both Japanese and foreign visitors. Osaka is known as Japan's kitchen and Dotonbori has an amazing variety of foods on display as you walk down the street. 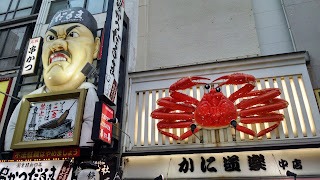 This view greeted me as I first entered the street. The signs are gonzo advertising, the sort of thing that would make a Times Square emporium blush. And these signs show the huge variety---crabs and sausages nestled next to each other. 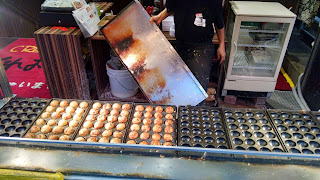 It took just a few steps for me to find my first objective: octopus balls. The young lady cooking them on the street was impressively competent in English and very adept with the grill. 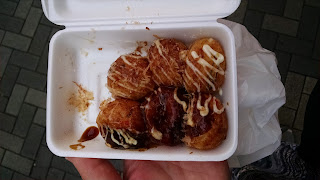 I ate mine as I walked down the street using toothpicks to spear them. These puppies were hot. And they were delicious. Each ball seemed to have two large rings. They weren't in the least tough. I ordered the sauce half-and-half, with a white sauce on one side and BBQ on the other; the white sauce was my favorite. 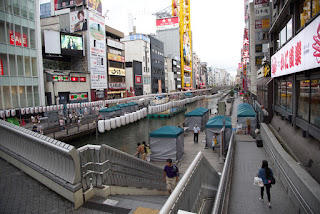 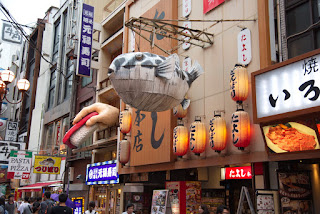 After enjoying the street and the river that runs by it, I headed south. 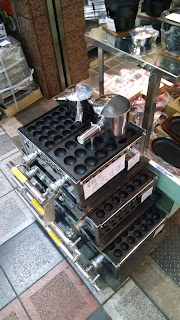 After a few blocks, I noticed this octopus ball cooker. Tempted as I was to buy one to open an octopus ball emporium at Lenox Square, I decided to put off those entrepreneurial ambitions. 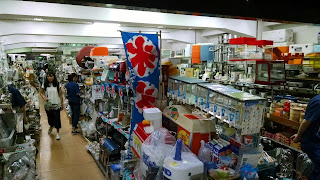 As it turns out, I had stumbled into the restaurant supply district. The stores displayed everything from stylish dishes to used kitchen equipment. The stores themselves were generally less industrial and more attractive than their American equivalents.