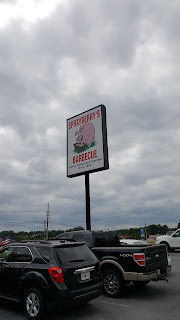 Sprayberry's is conveniently located just off I-85. Despite (or perhaps because of) its interstate-friendly location, it has been in business since 1928. It still has the attention to hospitality that marks a long-running family restaurant. One of the proprietors greeted me as I sat down at the counter. The hallway is covered in local newspaper articles, including a few on Newnan resident and humorist Lewis Grizzard. 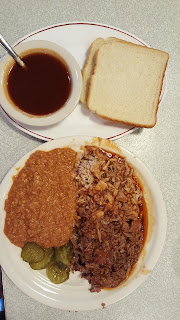 I ordered the regular BBQ plate with a pork/beef combination. The sauce and bread arrived as a teaser. A couple of minutes later, this plate arrived, covered edge-to-edge with meat. Lordy, lordy, lordy! I hate to think how much meat comes with the BBQ sampler. The meat was very good, moist and tender. The pork was very finely chopped, the beef a little less so. The sauce was red vinegar, which I think works very well with pork. 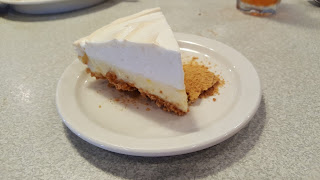 I came in not intending to have dessert. But one of the proprietors dished out a slice of lemon meringue pie in front of me and its siren song was too hard to resist. My slice was both beautiful and delicious. The meringue was perfect, a word I do not use lightly. The interior texture was a perfectly uniform sea of tiny bubbles; the meringue was applied to the top of the pie with perfect smoothness. The lemon filling was sweet but not overwhelmingly so, allowing the tartness of the lemon to show through while modulating the taste. I confirmed with the proprietors that the graham cracker crust is made in-house---it had a much finer texture than I have seen in any other.