September 09, 2016
Good tomato sauce requires a balance. On the one hand, it needs to be thick, which means removing water. On the other hand, it needs to taste fresh. Cooking the sauce for a long time increases its acidity and makes it taste less fresh. I stumbled upon an interesting technique to reduce the water content of the sauce without cooking---I froze the tomatoes.

I bought a case of roma tomatoes for canning. Thanks to a clogged kitchen sink, I couldn't make and can the sauce when I planned. Desperate, I put the tomatoes in the chest freezer for a few days---I put them on trays lined with parchment. 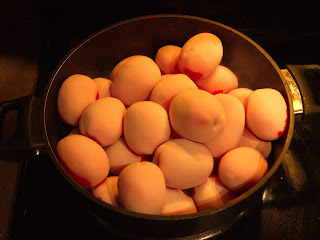 When I got back to the tomatoes, they were frozen solid and quite pretty, particularly after a little frost accumulated on them from the open air. I filled my pan with tomatoes and started to heat them. The liquid that came out was perfectly clear. As I drained off several batches of liquid, I started to get a little particulate matter, but the liquid was still mostly clear. Heating non-frozen tomatoes, in contrast, gives you liquid that is fairly clear but contains more tomato bits. 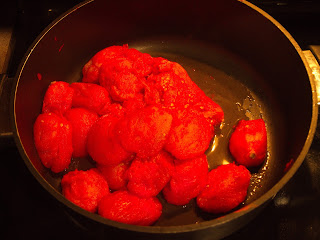 After draining out the liquid, that pan full of tomatoes was reduced to this small but rich batch. I cooked down all the tomatoes in the same way, then cooked them for a few minutes before canning. The result was the best batch of sauce I've made in several years.