October 08, 2016
I spent a lot of time over the weekend baking. Two items were noteworthy, each a notable addition to breakfast. 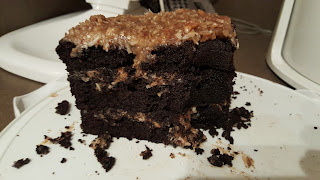 I made a German chocolate cake for the first time. For the cake, I used the chocolate pound cake recipe in the King Arthur cookbook. It turned out to be a great cake overall and perfect for this application: dense and rich. I also used King Arthur's recipe for the icing. Many recipes skimp with brown sugar; King Arthur calls for caramel. I looked at caramels at the store. They seem to be an endangered species. The ones I finally found were relatively expensive. So I made my own caramel, to which I added cream and ultimately the coconut. The result was superbly rich and flavorful. 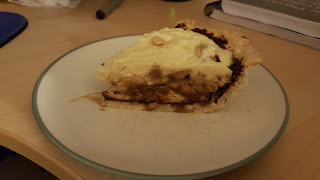 I also made a banana cream pie. I made my own crust out of pie dough that I blind baked. I then made a bit of chocolate ganache to cover the inside of the crust. That thin coating is just the right amount of chocolate to accent the pie; it also provides a moisture barrier to keep the crust crispy. I then made the pudding and spooned it over the bananas. Delicious.