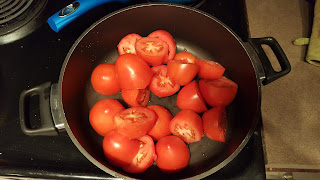 August means tomato sauce---I can my year's supply as the tomatoes come in. Did I miss the tomato season? The box of Roma tomatoes I bought was not local and the tomatoes were a little pale and firm. 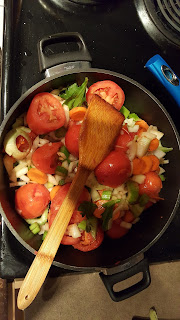 p> I decided to use Marcella Hazan’s recipe for tomato sauce II. It includes onions, celery, and carrots. For very ripe tomatoes, I prefer straight tomatoes with a little onion. But I thought that this recipe, which I haven’t used in years, would be a good choice for these tomatoes and a nice change of pace. The sauce cooks pretty quickly, taking less than an hour. The mirepoix vegetables give it additional body and makes the water from the tomatoes less of an issue. 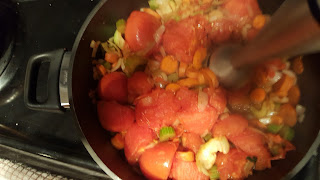 I broke up the ingredients using my stick blender. It isn’t as effective as a food mill but it works reasonably well. I enjoy the occasional piece of vegetable in my sauce for texture. 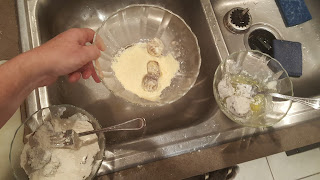 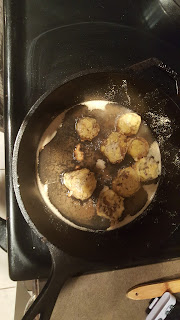 I wanted to eat a little right away so I tried a recipe from Chef Hazan’s cookbook that combines pasta, sauce, and fried eggplants. I coated some slices of tiny eggplant in cornmeal and fried them up. 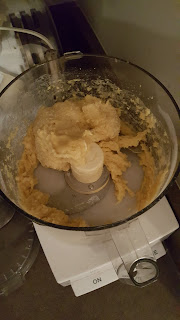 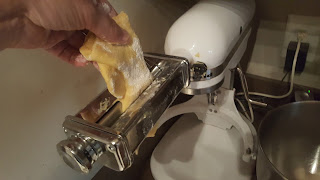 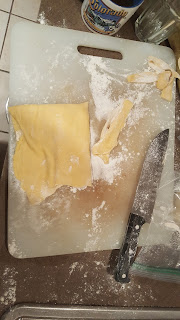 For the pasta, I used a recipe from Serious Eats. It uses more egg than I am used to using and I was curious to see how it worked. Being in a lazy mood, I mixed it in the food processor rather than by hand. Continuing my streak of non-Italian-grandmother behavior, I rolled the pasta using the Kitchenaid. I cut it by hand in wide noodles, which gives me a little more control. 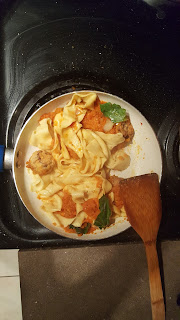 Once all the components were done, I assembled everything in a pan, giving the pasta a good stir to coat it with sauce. I topped it off with some grated Parmesan. This was a superb dish---I am indebted to Chef Hazan. The eggplant gives the dish heft and nutrition; the cornmeal coating gives a bit of sweetness to contrast with the sauce. The sauce was superb with a garden taste that spoke of bounty. The fresh pasta was extremely tender and absorbed the flavors of the sauce.